During the war, Clitheroe had 98 air raid alerts lasting a total of 147 hours, but no bombs fell in the town. The nearest dropped at Siddows, and others fell at Chatburn, Whalley and Lower Hodder. These facts were recalled by Councillor F.Dugdale, Chairman of the Civil Defence Committee, at Tuesday night's meeting of the Town Council, in the course of a survey of the work of the Civil Defence Services.

The nearest 4 were HE bombs dropped at Siddows on January 11th, 1942. The more serious was the tragic incident at Chatburn on October 30th, 1940 with loss of life, injuries and grave damage.

On December 20th, 1940 4 HE's were dropped at Whalley and two land mines fell at Lower Hodder, causing material damage, but happily no casualties. After that as many as 19 HE's dropped near Chipping and 7 more fell in Whitendale.

The article then is hard to read! We hope to research this further. 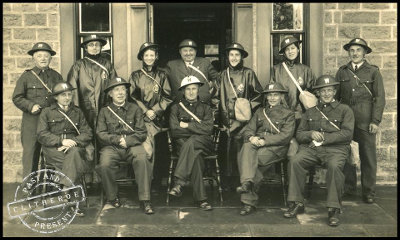 Photograph of Clitheroe Wardens with thanks to Clitheroe Past and Present

Lancaster F-Freddy - JB119  December 16/17 1943
Flight Engineer: Pilot Officer John Towler Pratt DFM, from Clitheroe was one of the three crew members who died when their aircraft crashed at Bourn airfield 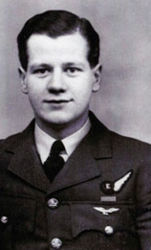 and was totally destroyed. This aircraft had previously been involved in the "Dambusters Raid".
Details of the crash and the crew members can be found at  the following web site www.firebynight.co.uk/Crew Mackenzie

Coder ACW 479974 Joan Weeks is second from left centre row. We are meeting Joan again soon to obtain further information which we will put on here. 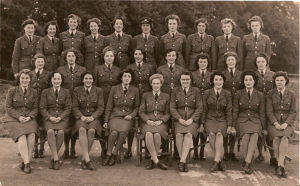 We met John Lockett son of Army Major Eric Barton (Bob) Lockett who passed away a few years ago. Major Lockett was a war veteran from World War Two who on returning from the Army became a Deputy Borough Engineer with the Ribble Valley Council.

In 1981, he was awarded the Association's highest accolade, the certificate of merit, and inscribed gold medal, for "valuable and meritorious service to his old comrades during 41 years.

In memory of Lieutenant Commander Richard Newstead Garnett, Royal Navy, third son of Mr and Mrs Newstead Garnett "Shireburn" Clitheroe who was lost in the sinking of the submarine 'Thetis' in June last, a beautiful stained glass window, the gift of his parents was unveiled at St Pauls Church, Low Moor, on Sunday last.

In June 1939 a new class of submarine was having its sea trial and was named the 'Thetis' and departed at 10am and by 3pm had sunk 160 feet below the surface with the result that 99 men died including Lt Commander R N Garnett. 4 men survived. Lt Commander Garnett had been invited aboard the 'Thetis' along with other officers and workers from Cammel Laird at Birkenhead who had built the submarine. The 'Thetis' was raised 12 weeks later and rebuilt and renamed the 'Thunderbolt'. One diver also died as a result of raising this doomed submarine. The 'Thunderbolt' was sunk on the 14/3/1943 this time by an Italian Sloop named the Cisogna with 62 men lost this time.

Lt Commander Richard Newstead Garnett was in fact the officer in charge of his own submarine the Taku. We have information that the majority of those lost were buried in a mass grave at Holyhead. We do not as yet know if Lt Commander Garnett was buried with these men or returned to the Ribble Valley.

Warship Weeks were British National savings campaigns during the Second World War, with the adoption of a Royal Navy warship by a civil community. A level of savings would be set to raise enough money to provide the cost of building a particular naval ship. The aim was for cities to raise enough to adopt battleships and aircraft carriers, while towns and villages would focus on cruisers and destroyers. Smaller towns and villages would be set a lower figure. Once the target money was saved for the ship, the community would adopt the ship and its crew.

Local charity organisations, churches and schools would provide the crews of the adopted ship with gloves, woollen socks and balaclavas. Children would often write letters and send cards to the crew. When possible, officers and men from the adopted ship would visit the local community. To celebrate their visit, a parade would often be organised in their honour.

The ship’s commanding officer would exchange plaques, objects and photographs with the city or town that reached the target set, and an adoption would begin. The number of warships adopted was over 1200, and this number included the battleships, cruisers, destroyers and trawlers.

This destroyer was partly funded by the good people of Clitheroe during WW2.  HMS Castleton.