Additional Info: John Pratt was with the Pathfinder Squadron as a Flight Engineer. He joined the R.A.F. in 1939. Prior to this he assisted his Father who farmed at Gisburn before coming to Clitheroe and becoming a cattle and poultry dealer. Son of John and Isabel (Nee Towler). Married Settle 1914. John was in the Parish Church Choir at St Magdelene. 2 months prior to his death John Towler was awarded the D.F.M. Address of 19 Pimlico Road, Clitheroe.

Information on the actual crash involving John Towler Pratt and his other crew members can be found on the Ribble Valley WWII page under Lancaster Bomber Crash,

"Whilst on one of many missions, the aeroplane was blown onto its back by an A.A shell. During the inverted dive which followed he rendered invaluable assistance to the pilot in righting the machine. He possesses skill and courage which have been unfailing in the face of difficulties and dangers". 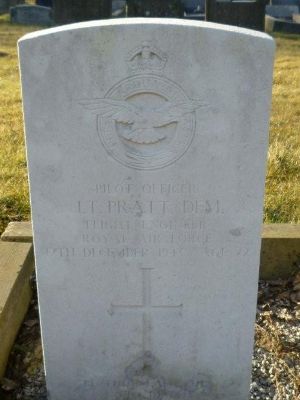