Additional info:  Son of Mr and Mrs T Emms, of 49, Moor Lane, Clitheroe. Reported missing in October 1942, following a heavy raid on Cologne, have now been informed that he was killed. The sad news was received through the medium of the International Red Cross Committee at Geneva, who have received an official German statement that the whole of the crew of the bomber lost their lives and have been buried at Menden, 14 miles south-east of Cologne. Sergeant Emms , who was 20 years of age, joined the R.A.F at the beginning of the war, and had been on several flights over enemy territory. At the time he joined the Air Force, his parents were living in Folkstone and they have removed to Clitheroe since. Commonwealth war Graves have one of his forenames as Jack and not John! Clitheroe Advertiser and Times dated January 15th 1943. 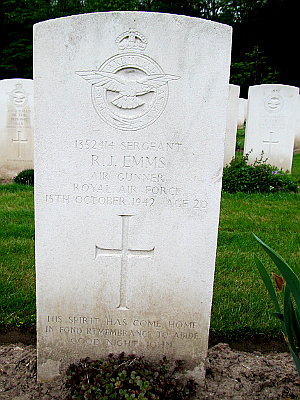