Additional Info: Only son of Tom and Polly Rutter of 12 Queen Street, Whalley. Taken from the Clitheroe Advertiser dated 6th December 1940. A gloom was cast over Whalley and neighbourhood yesterday, by the news that Mr Tom Rutter, wireless operator-gunner in the Royal air Force had lost his life. It may be recalled that his father was awarded the Military Medal in the last war. Only 20 years of age, Mr Rutter was possessed of an exceedingly happy disposition, and was numbered among the most popular young men in the village. From the Whalley Church of England School he passed to the Clitheroe Royal Grammar School and subsequently entered the office of Mr H.P. Airey, Land Agent and Rate Collector, Station Road, Whalley. At the Parish Church too he was a chorister for several years and he had the reputation for proficiency as a golf player at the Whalley Club. His death comes a shock to all who knew him and general sympathy will be extended to his parents in their sorrow. The funeral is to take place at Whalley. Taken from Clitheroe Advertiser dated December 13th, 1940. The internment took place on Monday afternoon in the Parish Churchyard where almost every phase of village life was represented. Five members of the British Legion carried the coffin (covered with a Union Jack) from the house to the Churchyard, being preceded by members of the Whalley Home Guard, under Sergeant Sutton, and the Church Choir, in Cassocks and Surplices.

There were also present Mr J.Green (Chairman) and Mr R.T. Varley representing Clitheroe Rural District Council, along with Mrs A Jackson and W Chadwick (office staff) representatives of the Parish Council and Golf Club, Mr J.W.Chew, the village Schoolmaster, and Mr H.P Airey (Sergeant Rutter's former employer.) Flight Sergeant Gibbons represented the squardon with which Sergeant Rutter was serving. Prior to committal, the vicar (Rev, H.W. Butterworth) conducted an impressive service in Church, in the presence of a large congregation. The hymn," Jesus Reigns" and the 23rd Psalm, were sung. As the funeral party entered, Mr Clarence Green, organist played the aria " I know that my Redeemer Liveth" and at the end of the service, the "Nunc. Dimittis", and "O Rest in the Lord" were played. 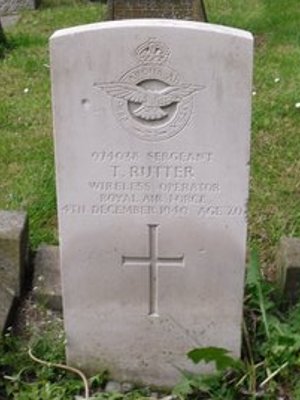