Vicars Tribute to Fred Holt in Parish Church Service. "SERVED TO POINT OF DEATH" A son of the Borough Sergeant Fred Holt  who was killed in a flying accident whilst serving with the R.A.F was laid to rest in St Mary's Cemetery on Saturday afternoon. Sympathetic spectators lined the streets at several points as the cortege proceeded to the Parish Church. In front of the hearse, bearing the Union Jack, walked the local Air Training Corps and escorts, and a firing party provided by the Army. In the large congregation at the Parish Church was the staff and work people from the Jubilee Mill, where Sergeant Holt was previously employed. Aircraftman T Bailey represented the Parish Church Men's Institute and Fellowship, and Councillor I.T Rushton the Sunday School. The Mayor (Councillor M French) also attended. During the service the 23rd Psalm and the Hymns "How bright those glorious spirits shine" and "O God our help in ages past", were sung. The organist , Mr H.B.Shaw, Music Backing played the Adagio movement from Beethoven's Sonata Pathetique as the funeral party entered the church and the Dead March in "Saul" at the termination of the service. The lesson was read by Mr A Langshaw.

Addressing the congregation the vicar (Rev.W.S.Helm, M.A.) said he thought such an occasion was one at which he ought to try ad say something of comfort, consolation and hope to those who grieved, for it was when that sort of thing happened that the grim horrors of war were brought home to our very doors. They were met that day to pay tribute to Fred Holt who lost his life in the defence of his country, he served to the point of death. "We knew him as a bright, happy intelligent young lad, a keen sportsman, and one whom it seemed to us had a great future in front of him." "I have no doubt many of us have tried to ask why such a lad as this associated as he was with our church and Institute and for whom there was a bright future, should have his life cut short? Perhaps in the bitterness of your hearts you have said "Why does God allow it" God could not help it. So long as man' by man I mean the whole World - will go his own way, will still be selfish, then this sort of thing is bound to happen. God has shown us a better way but we have not learnt it. That is the whole meaning of the War.

"The World has not learnt and so long as mn goes on making a mess of God's good earth, God can do nothing to stop it. He can only grieve."

Observing that the parents sorrow was shared by God, the vicar said they had only to think of the Cross to realise what selfishness meant to Him. Father, Mother and friends had been stricken but he asked that all should think of God as a striken father - God who once saw a son die. God knew all about their grief. He was sharing it to the utmost.

THE BEST OF LIFE

And what about Fred? They should think of him in terms of life not in terms of death. He had had the best of life, had tasted its fruits and happy joys in the full fresh vigour of youth and said the vicar he thought it right to say there was no period of life so full of joy and happiness as youth. Fred had enjoyed that. Perhaps he had been spared much pain, and disappointment and trouble which the years might have brought him. They should think of him now in life, enjoying life knowing more and experiencing more than he had ever done before. If he could speak he would say "Lift up your hearts, all is well. God will take care."

There was no such thing as a wasted life, for God had some other work for them to do. But they who remained had still their bit to do. He did not mean this in reference to the war, for the war was but an incident in life. Soon the war would be but a bitter memory, a few pages of history, but life the business of 'life' would go on. If they were spared, some of them and the younger people in particular, had their part to play in life and there was nothing wasted in life that was good. He believed God was calling everybody to realise what a good thing life might be, by increased obedience to His will more widespread knowledge of his love, and an endevour to make the world more like He wanted it to be.

"If we all prove worthy, we shall share with those who have gone before the joy of being with God," said the vicar. In conclusion " That is the message of life, it is the end of life, the thing which goes on and never stops. Fred has contributed his part in a short time. Some of you may have to wait a long time, it doesn't matter. In the providence of God it all works out for the fulfilment of His purpose. And so seek after God, cleave to him as you have never done before that in the end He may bring you and all whom you have loved, together in the joy and peace of His everlasting Kingdom."

The coffin was borne to the grave by six sergeants, and following the committal service, two buglers sounded the Last Post, followed by the Reveille, and a party of twelve fired a farewell salute.

By the death of Fred Holt whilst on flying duty with the R.A.F, the Borough has lost one of its most popular young men. To his friends "Freddy" was still boyish in his demeanor being at all times bright and cheerful, and displaying an unbounded energy. At the Grammar School, the Parish Church and at work he won the admiration and respect of all who came into contact with him. An all round good sportsman, he was an enthusiast in athletics, boxing and swimming, but it was his prowess on the football field that brought him to the public eye. No better right half back ever donned the Parish Church colours, and it is certain that he would have gone far in the game. If lacking somewhat in inches he had a remarkable physique and muscular development quite above the ordinary and always he played the game fairly so much so that opponents held him in high esteem. Freddy loved the game. He could be relied upon to give of his best throughout 90 minutes, and he never showed a sign a sign of perturbation no matter if the play was going against his side. Not only at home but at Accrington he had many friends and admirers and not better player was better respected in the Accrington Combination. And the zeal he showed in sport was matched at work and in an endevour to better himself, as evidenced by his study at the Accrington Technical College where he gained a County Exhibition Scholarship for textile design just before joining H.M Forces.

Of his career in the R.A.F I can say little except that he attained the rank of sergeant in a comparitively short time and that he won the esteem and regard of everyone about him. "Freddy" did a man's job. He gave his life for his country and his fellows in the fight to retain freedom and liberty. He has passed as the motto of the R.A.F has it -Per Ardua ad Astra -Through Hardship to the Stars. T.B.

Three weeks ago he played in a game. A youngster on leave with life aflame. His side they lost, but he'd pulled his weight. He played for the game and played it straight. Then he fought a flight high in the Sky. And where ever better could a man die? With sun, or star, to gleam on the cloud. Transformed into radiant gossamer shroud. So they brought him home, aged twenty one. His short journey o'er, his work all done. But not in vain, if our lives we give To build a world in which heroes live. A.H.

We have further information that Sergeant Fred Holt was killed in a flying accident with a Hurricane near Sutton Bridge in Lincolnshire which was an RAF base. All reported as killed in this accident.

Seven killed in once incident - Rest In Peace. 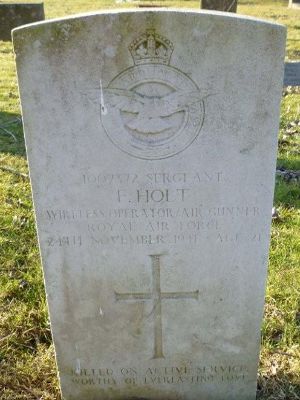