With grateful thanks to Susan Eldridge for the use of her photographs. 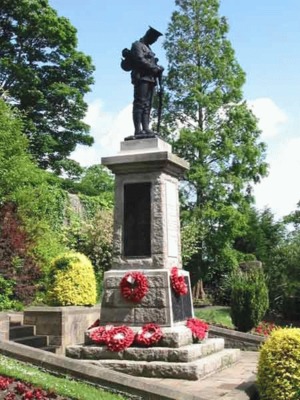 Those Killed from Clitheroe

84 We now list Lieutenant Commander Richard Newstead Garnett who died on board H.M.S Submarine Thetis on the 1st June 1939. We list him here as this accident which resulted in the death of 99 men was in June two months before the war commenced. Only 4 men survived this tragedy. This was a new class of submarine and was being taken out on sea trials and Lt Commander Garnett was invited aboard along with other commanders, ship yard builders and other staff from Cammel Laird in Birkenhead where the submarine had been built. It departed at 10am and by 3pm had sunk buried 160 feet down. R N Garnett Lt Commander was Commander of HMS Taku. Full details of this terrible accident will be researched at a later date.

We do know that his family dedicated a beautiful stained glass window in the church at Low Moor. Article from the Clitheroe Advertiser and Times dated Friday 10th May, 1940. R N Garnett was the third son of Mr and Mrs Newstead Garnett "Shireburn", Clitheroe. The window was unveiled by his Mother. It is the work of of a London artist, Miss Jessie Bayes. Of modern design it admits the maximum of light. The Biblical incident of Christ calming the storm is chastley depicted and the window contains the Latin inscription " Dulce et Decorum est prop patria mori" a sweet and noble thing it is to die for one's country.

The new window was dedicated in the presence of a large congregation by the Rev. G P Lowe, Vicar of Peel, Littlle Hulton, brother in law of Lt Commander Garnett. Among those present were the Mayor and Mayoress Councillor and Mrs F Bentham). During the service, which was conducted by the Vicar (Rev I Pugh) the hymns "Lead Kindly Light" "Ye servants of the Lord" "How bright these glorious spirits shine" and "Eternal Father, strong to save" were sung.

In the course of his address the Rev G P Lowe said that in church not only the words we sang, spoke or heard made indelible marks upon our characters, but we were often very deeply impressed by what we saw. That afternoon they had set apart in that House of God a beautiful window, designed by an artist of repute, which would in the years ahead make its impression upon thousands of worshippers.

After describing the window, Mr Lowe said not only was it beautiful, but its subject matter was most appropriate, depicting one of the most beautiful incidents in our Lord's life -the stilling of the storm. There were people to-day who found it difficult to believe our Lord's miracles, forgetting that Christ was able to do what he did by virtue of what 'He' was. His miracles and cross fitted in the framework of the historical foundation of our faith that Jesus was the Saviour of the world and the living God.

In a reference to Lt Commander Garnett's associations with the church and district and to his stirling character, Mr Lowe said it was a great privilidge to know him, to respect him and love him. He was a man who never talked about himself and who had all the confidence of the unassuming. "He was cheerful and friendly and he had a thoroughly kind disposition, with not a trace of meaness in his character," Mr Lowe added.

Lt Commander Garnett took a great delight in simple things. Mr Lowe continued. He loved nature, and one of his great enjoyments was to spend his leisure time fishing. He felt sure that when Jesus called the fishermen to follow him on Galilee he must have known something of their characteristic patience. Something of Lt Commander Garnett's ability was evidenced by the fact that at a comparitively early age he was given command of a vessel (H.M.S. Taku), and he had also a wonderful sense of duty.

In an age when so many people were talking about their rights, it was wholesome to find someone with so keen a sense of duty.

In the clock tower of Birkenhead Priory, St Mary's Gate, Birkenhead are metal plaques dedicated to each man who lost his life that day. The tower overlooks the Cammel Laird Shipyard where the submarine was built and many who created her lost their lives.

The submarine was renamed H M S Thunderbolt but on the 14/03/1943 was sunk by the Italian Sloop Cisogna at 08.45am with the loss of 62 men.  More information to follow.

Once more information is researched we shall include Lt Commander R N Garnett on our main web site.

All Resting and Remembered around the World. God Bless. Fought and died for Freedom, Liberty and Peace. 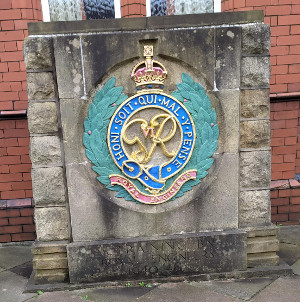 Royal Engineers Emblem which is near the Low Moor Memorial as they were based in the former Mill in that area. 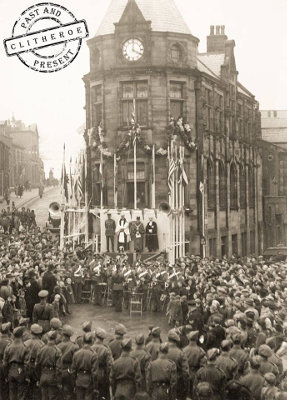 This is a photgraph of Clitheroe during World War II.

It is shown here with thanks to Clitheroe Past and Present