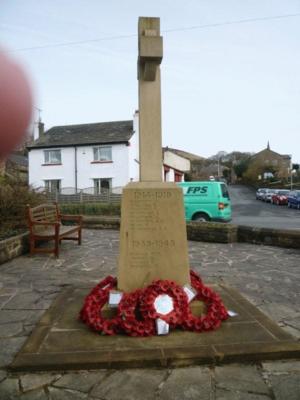 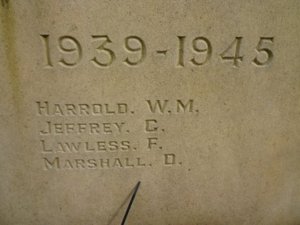 Those Killed From Sabden

Pioneer Corps. 45 Coy. Number 13081595. Aged 35. Died 11/04/1945. Son of Harley Edward and Cissie Harold and originated from Dublin. At the outbreak of war Walter and his two brothers came over to England to enlist in the Army. Husband of Agnes Harold who he met whilst training with the Pioneer Corps in and around Sabden. Lived on Pendle Street East, Sabden and had one son. Walter died from extensive injuries as a result of an accident whilst on active service in Western Europe. He had been stationed in Brussels which had just been liberated and was part of a team of men repairing railway lines, when they were struck by a train, killing two and badly injuring three. Walter was one of the soldiers killed. Resting Brussels Town Cemetery, Evere, Vlaams-Brabant, Belgium. Grave X.21.6.

Coldstream Guards. 2nd Battalion. Aged 20. Killed 21/05/1940. Service number 2658793. Resting Pecq Communal Cemetery, Belgium. Grave 3 Row C. Frank lived with his parents at Fort Villa, Pendle Street East, Sabden. From school went to work for Messrs Lockwood and Buckley as a weaver at Union Mill, Sabden. Joined the Army in February 1939. When war was declared he was shipped to France. Came home on leave and then returned again after Easter 1940 to then be killed in action on the 21st May 1940. Frank is buried alongside nineteen of his comrades.

East Lancashire Regiment. Service Number 273065. Aged 25. Killed in Action 16th July 1944. Resting at Fontenay-le-Pesnel War Cemetery, Tessel, Calvados, France. Came from Portugal to Sabden with his parents at the age of two. Parents called Robert and Jane with the two brothers called John and Robert. Lived at the Rydal Mount of Jane's sister, Mrs Annie Wood. The two sisters were Scottish and had met their husbands whilst working in a printworks in Lisbon, Portugal. The Jeffrey family with the birth of another son Leonard, moved into Thorn Street and then Watt Street, Sabden. Charles attended Sabden Council School and then onto Burnley Junior Commercial School. When Charles was fifteen the family moved to The Chapel House, Hebrew Road, Burnley where his father became caretaker at the Ebenezer Baptist Church and Sunday School.

At the outbreak of World War Two Charles, was working at Messr's Kneeshaw and Moffat Chartered Accountants, Burnley and enlisted in the Army (Royal Army Ordanance Corps) and served in France until the evacuation of Dunkirk in 1940. Met and married Alice Wood whilst both of them stationed in London. Alice was serving in the W.A.A.F as a driver. It is reported she drove for the famous organist Reginald Dixon, who at that time was an officer in the R.A.F. They married at the village Baptist Chapel in July 1943.  Charles was commissioned earlier that year in April 1943 and was transferred to the Royal Artillery and was now in the East Lancashire Regiment. He went to France on the 28th June 1944. On the 16th July, Charles's company took part in an attack to capture a section of the Villers -Bocage-Road. They came under heavy fire. Charles was killed. The objective took 48 hours to capture with the result of 200 casualtes.

Royal Engineers. 220 Field Coy. Aged 29. Number 1948142. Died 07/06/1943 as a result of an accident in the Middle East. Son of James and Margaret Marshall, who lived in Burnley. After school he was working in the mines for eleven years at Townley Pit before moving to Barden Pit, again at Burnley. Husband of Agnes Marshall and resided at 16 Thorn Street, Sabden. Had two children. In January 1941 Dennis enlisted in the Royal Engineers. Then after training was sent to Tripoli in the Middle East.  Resting Tripoli War Cemetery, Libya. Grave 8.D.4.

Apart from Lieutenant Charles Jeffrey the above men and those from World War One are now remembered on a War Memorial in Sabden recently erected. A Roll of Honour is also in the local Catholic Church. A wooden War Plaque which again doesn't have Lieutenant Charles Jeffrey on is inside the C of E School at Sabden and well looked after. Much if not all credit must got to a local historian Simon Mount for his dedicted research over many years and those that also supported him to raise funding for the War Memorial in the village and Roll of Honour.

Why Lieutenant Charles Jeffrey is not on the School Memorial Metal Plaque shall be further researched for an explanation if possible and if permission given we shall amend this if possible!