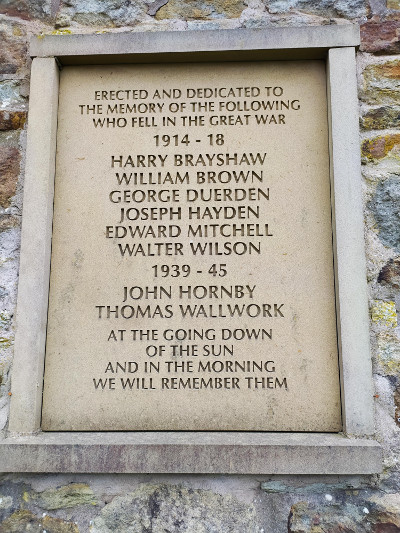 At All saints Church, Pendleton on Sunday afternoon last, a memorial service was held for Lieutenant John Raymond Henry Hornby. (Clitheroe Advertiser and Times dated December 11th 1942). Only son of Sir H Russell Hornby, Bt. and Lady Hornby of Barraclough, Clitheroe who was killed in action in the Middle East. November 1942. The little church was filled to its utmost capacity. The large congregation included the parents and sister of Lt Hornby and representatives of the leading families in the district. There was also a detachement of about 50 officers and men of the Home Guard.

The service which was simple in character, but very impressive, was conducted by the Rev. E Hurford Jones, Vicar.

Midway in the service and prior to the singing of the hymn "How bright these glorious spirits shine" the Vicar, briefly, but fittingly, made the following reference:-

"It was no time or place to say much, but Lieutenant Hornby to whom they were holding a memorial that afternoon, was a very gallant gentleman of whom they were so proud. He volunteered to go overseas when he might have stayed in this country, and his great sacrifice was a great value to the common cause. They all knew him and they remember him. They thanked God he had been saved from much cruel torture and excruciating pain, and knowing God had taken him to himself they would leave him in his keeping."

At the close of the service the hymn, "Peace, perfect peace," was sung, and as the congregation left the church, Mrs Macdonald the organist, played "O Rest in the Lord."