We are delighted to state that two widows from Candlemakers Court in Clitheroe with our help have recently obtained medals for their late husband's from the MOD who served in the Royal Air Force. Mrs Dorothy Peel who's husband Charles William was an elecrician in the RAF and served in Blida -Algeria and Mrs F Barlow who's husband William also an electrician in the RAF, serving in Egypt and India.

We have currently sent off information to the MOD for another lady from here who was in the RAF in the 1950's to see if we can obtain a Service Medal for her.

Roger Leach Medals (Father) 26th August 2010
We are pleased to state that through our project we have ben able to help our own Video Volunteer Roger Leach to obtain his late Fathers medals. Rogers Father served in the Army during World War Two. Nice one.

Chris Tattersall
We have recently helped Chris Tattersall to apply for his Grandfather's Medals who was captured at Dunkirk and a POW for the rest of the war. More information to follow.

We are delighted to say that we appeared on page 35 of the Sunday Express with Sam Brearley's presentation and photograph featuring along with Kath Brooks being quoted concerning the recent presentation at St Mary's Church, Clitheroe of her brothers medals (Stanley Pollard) to her and her sister Marjorie.

Our thanks go to the National Lottery press team for this.

We are pleased to see Sam our veteran from Whalley and Vic his POW friend from Australia appear in the Clitheroe Advertiser dated Thursday 19th August when they were talking and able to see each other via a Skype communication system which took place at the home of the Ribble Valley Borough Council Mayor Councillor Mrs Lois Rimmer who is also in the photograph. Our thanks go to her. Nice one.

BBC TV visited Clitheroe on Monday 9th August to film snippets of our project for the live National Lottery Finals which will be shown on the evening of Saturday 4th September. The winners of the Lottery Good Causes will be announced during the Lottery Draw. Our organisation have been invited to send down several representatives and we will set off at about 7am to get to London for a run through and what we can and can't do etc. We are certainly looking forward to the occasion but do need your votes to support our chance of winning. Lines open from 09.00am on Monday 26th July until Friday 13th August at 12noon. The number to ring is 0844 686 5959 which will register automatically for Clitheroe Youth. The website link is www.lotterygoodcauses.org.uk/awards then click on Clitheroe Youth -Heritage project but several letters need to be typed in before the vote is registered

The BCC finally finished filming in Whalley at 8pm. This was a long but productive day. Our thanks go to everyone that was involved. 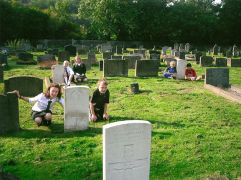 Several of the Junior Members in the Clitheroe Cemetery 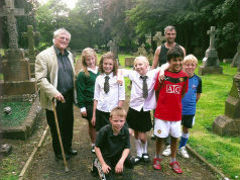 Junior members in the Catholic Cemetery at Brungerley, Clitheroe.

It was an early start as BBC Radio Lancashire invited us to speak on the radio about our National Rotarian Award and our World War Two project which Morgan Rawcliffe, Bailey Moss and Harry Ellis did us proud. We must have been on the air for a good ten minutes..Nice one.

It is with the deepest of regret and sadness that we have to state that Edward Jones has recently passed away (Tuesday 28th September 2010).

We only recently met and filmed Edward Jones of Hazel Grove, Clitheroe as part of this project. Was formerly Private E Jones of the East Lancashire Regiment during World War Two who was seriously wounded in Normandy during the D Day landings. Second son of Mr and Mrs J Jones of Beech Street at that time and formerly of Woone Lane (as reported in the local paper) was taken originally to a hospital in South Wales on his eventual return to the UK. His brother Alfred as reported in the paper went to visit him there. Edward was part of a Bren Gun Carrier (Driver) and ordered to go forward after landing on the beaches and silence a German machine gun post. After advancing several hundred yards through the thick of enemy fire the crew had to abandon the carrier owing to the difficult terrain. Edward also mentions that one of his pals was killed by a sniper at this point. Shells began to burst around them and as they threw themselves flat on the ground Private Jones felt something hit his right shoulder but did not think anything of it and carried on. This was in fact the first of his injuries.By now Private Jones and his comrades had got near to the machine gun post and sweeping it with fire from their bren guns, they effectively silenced it. To make sure that the Germans were not foxing, Private Jones and his sergeant went forward, under covering fire to discover that they in fact, silenced eight Germans for ever.