All about Sam Brearley May 2010

If this article from the  Lancashire Evening Telegraph on Friday 21st May 2010 is not readable - even with zooming the view, try this link 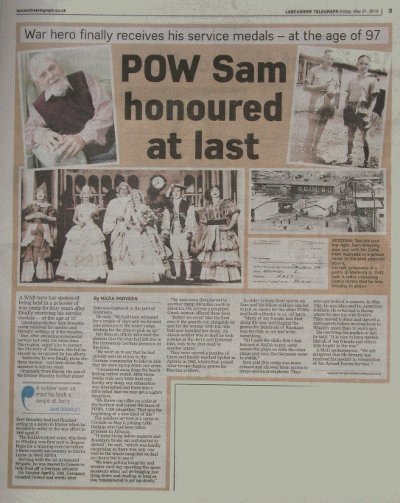 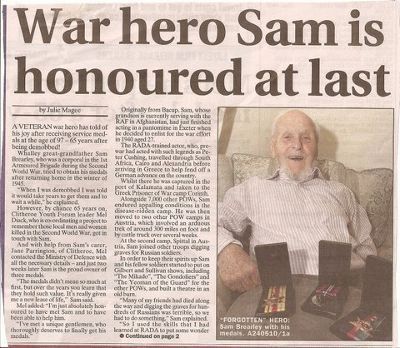 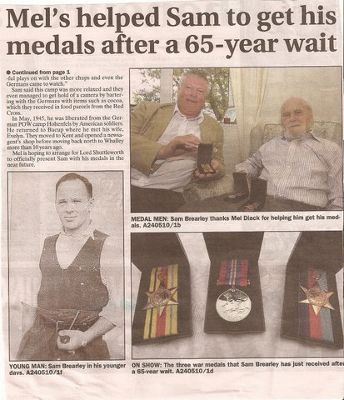 We were invited to BBC Radio Lancashire on Friday 3rd September for 08.00am to discuss our project having reached the National Lottery Finals which will be shown on BBC 1 on Saturday evening the 4th September during the live Lottery Draw. Michael Tomlinson and David Bolton joined Mel Diack. This interview went really well and Sam Brearley our 97 year old veteran was also on tape. Graham Liver interviewd us and our thanks got to him and his crew for this morning. 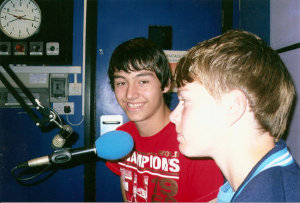 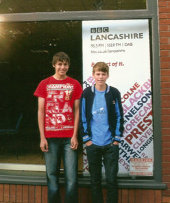 At 07.30am on Friday 13th August Kath Brooks, Caroline Dewhurst, Morgan Kennedy and Morgan Rawcliffe went on BBC Radio Lancashire at Kath Brooks home in Clitheroe to talk about the Church Service, presentation and about our project. Interview lasted a few minutes and everyone did really well considering such an early start. Alison from BBC Radio came along with her van and the mast when extended from the top of the van was about a tall as a large house.

Early start this morning as we were on BBC Radio Lancashire in Blackburn and had to report in for 08.00am which meant doing the collection round of young members at 07.00am in Clitheroe. Lucy. Caroline and Thomas very kindly agreed to do this which was to promote our project and mention that the closing date for the National Lottery Finals was coming up on Friday 13th August at 12noon.

Roger Leach came along to help and joined in the conversation.

Much of the time was taken up be football round ups due to the new season starting on Saturday.

This was a great experience for all concerned and Lucy, Thomas and Caroline did really well. It is quite somthing to be sat in a studio with microphones, lights, mixing desk, live reports coming in and lots of cameras showing other reporters and weather reports being transmitted across the region.

Well done to all concerned and our thanks to BBC Radio Lancashire for having us on.

Discussions have now taken place with the local Church Leaders to hold a religious dedication ceremony for the Roll of Honour and Braille Book and this is will take place at St Mary's Church, Clitheroe on Monday 13th September at 7pm. Members of the public are welcome.

Our thanks go to Norman Kelly and Chris Tattersall for the work involved in these two respective elements of the project.

Our thanks got to Roger Leach who is battling away on the filming aspect of this project and helping and assisting other aspects as well as at every opportunity helping the youngsters.

Discussions are taking place with the Manager/Keeper of the Castle, Rachel Jackson to display the Roll of Honour and Braille Book sometime in November this year. We very much appreciate her help and that of the Lancashire County Council Museum Services.

Eleven lads set off to visit one of the World War Two crash sites on Burn Fell near Slaidburn and Newton on Monday 26th July. They eventually reached the top but due to the rain and heavy mist couldn't see anything. Good effort lads and perhaps another day!

Heartfelt Thanks To Youth Forum

The following appeared in the local paper - On behalf of my sister, Marjorie, and myself, I would like to thank the Clitheroe Youth Forum and especially the chairman, Mel Diack, for helping to obtain my late brother Stanley Smith Pollard's war medals. Stanley was killed serving in the Royal Navy in 1945 at the age of 19. A wonderful church service took place recently at the Clitheroe Parish Church where we were presented with his medals. We also wish to thank the Rev. Dr Peter Shepherd and local dignitaries who came to present the medals.

Our thanks go to Kath for this letter and we are proud to have been able to have help.