Our thanks go to Rodney Read and John Ridgeway for letting us have a copy of their newly published book -'The Day World War Two came to Chatburn'. A lot of work and effort by all involved and our thanks go to them.

We are delighted to state that Sam Brearley our 98 year old veteran had a wonderful afternoon at Buckingham Palace (Wednesday 29th June 2011) at the the Royal Garden Party. He and his carer Jayne met the Queen and Prince Philip. Sam was also accompanied by one of his relatives who lives in the South of England (Liz).

The train journey went well and Sam got home around midnight having set off at 10am that morning. A long day but worth it.

From Monday 16th May the Clitheroe Library will display the two National awards which we won last year (2010). These are the National Lottery Runner Up Trophy for Community Projects and the National Rotarian's Youth Groups Winner Trophy.

Caroline Dewhurst, Morgan Kennedy, Morgan Rawcliffe and Maria Hitchin attended on behalf of Clitheroe Youth the Ribble Valley Borough Council Civic Chambers on Thursday evening the 12th May to meet the retiring Mayor, Councillor Mrs Lois Rimmer along with representatives of other groups who she has met over the past year and wished to say a few words and congratulate everyone on their respective achievements as well as making a donation to each organisation from her fund raising events. Our thanks go to The Mayor Councillor Mrs Lois Rimmer for her support. A picture should appear in the local press. 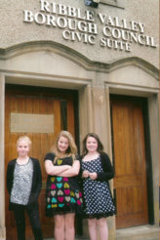 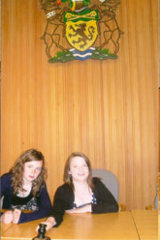 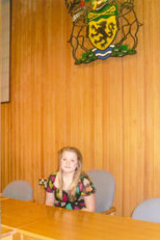 An item appeared in the Clitheroe Advertiser and Times dated 28th April. Page 5, a photograph of which appears in the Celebration St Mary's 20th April 2011 article.

The item on the Clitheroe Advertiser and Times web site.

Delighted to say that our project Celebration took place at St Mary's Church Hall on Wednesday 20th April commencing at 2pm. Our thanks go to Andy Froud (Vicar) for conducting the services. To the Clitheroe Army Cadets who had their Standard Blessed at our event. The Mayor of the Ribble Valley Borough Council -Councillor Mrs Lois Rimmer and her consort Gordon along with the Mayor of the Clitheroe Councillor Alan Yearing and Mrs Yearing with Peter Robinson the Deputy Lord Lieutenant who also very kindly attended and helped present the World War Two Medals along with other military awards.

A senior representative from the Heritage Lottery was also in attendance as were many veterans, families and parents of our Junior Youth Forum members who were brilliant again. The art work, presentations and speeches were wonderful.

Grace O'Malley even though poorly sang so well and Pannette the bugler was also inspirational. Michael our piper played us into the hall. Our thanks go to members of the Royal British Legion, police, fire services who also attended.

We showed a snippet of our film which ran to about 26 minutes and our thanks go to Roger Leach and Marion for this.

Our thanks to Colin and volunteers at St Mary's Church Hall.