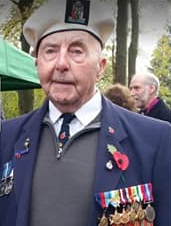 Jim was another of our Veterans who assisted our project and met the young people.

Bon Voyage sailor and may your journey on that sea be wonderous.

From all members of the Clitheroe Youth Forum.

We are sorry to announce the loss of George Hardman aged 83. George helped with making all our poppy crosses and putting together all our flags for every service. George did his National Service in the early 1950's serving in Singapore.
George will be greatly missed by his family, neighbours and Clitheroe Youth Forum.
Thank you George

We are sad to state that Bill Stratton another of our veterans who helped us has passed away aged 94. William Bill Stratton was born on 2nd April 1922, West View, Clitheroe. Attended Ribblesdale School and at the age of 16 worked at Whitesides Wine Merchants.

Six months prior to WW2 starting Bill joined the Clitheroe Territorials. The start of the war saw him join the Royal Artillery and he fought in India and Ceylon, now known as Sri Lanka.

Bill was on leave in Chatburn where he lived with his wife Jean when the village was bombed, in October 1940, by a German Heinkel 111. Bill did what he could to help as several people were injured and killed.

Bill leaves a wife (Jean) , children, grandchildren and great - grandchildren. Our thoughts are with his family. God Bless.

Raymond Cox a Veteran who fought in World War Two and served in the Army passed away early February 2014. Raymond was part of our Heritage project.

Our thoughts are with Raymond's family.

The following image, with additional information, was supplied by the Powell River Museum of Canada for use here.
We thank them for this contribution.

Veteran Sam Brearley aged 99 sadly has recently passed in Blackburn Royal Hospital.. Sam had been very poorly and in and out of Blackburn Royal Hospital and Clitheroe Hospital for several weeks. We visited Sam several times in hospital and when he was sent home prior to going in for the last time. Sam's funeral took place at Burnley Crematorium on Tuesday 21st August at 2pm and was well attended.  Kevin Cheetham a standard bearer for the Royal British Legion attended.

Sam originally from Bacup was a member of RADA prior to joining the Army in 1940. He fought with the 1st Armoured Brigade 2nd Division in the Allied campaign against the Germans in Yugoslavia and Greece and was captured during heavy fighting in 1941 at the southern Greek port of Kalamata. Spending the rest of the war as a prisoner in grim conditions he helped to keep up his fellow prisoners morale by organising entertainment at the camps he was imprisoned in.

We were able to help Sam receive his numerous War Medals with special ceremonies at the Ribble Valley Council Chambers including a further ceremony for his long awaited Greek campaign medal. Sam appeared on regional and national television as well as radio Lancashire through these medal awards as well as local and national newspapers. Sam loved to potter in his garden and greenhouse. His tomatoes were one of his pride and joy.

Our condolences go to Sam's family.

We shall miss you Sam and thank you for all you did for us.