Clitheroe Radio Friday 26th March 2010. Arron Ripley, Daniel Dewhurst and I took part in a Clitheroe Radio show commencing at 6pm in the basement of St Mary's Church Hall in Clitheroe. Frank hosting the show. Roger was in attendance recording and this should be on our website in due course. The main thrust of this programme was again to appeal for listeners to come forward in addition to explaining why we are doing this and how we have got on so far.

Daniel and Arron had to leave by 7pm so I carried on until the end. This was again a good experience for all concerned and our thanks go to Frank and the Clitheroe Radio which is on the Internet.

Since my letter in the Clitheroe Advertiser and our session with Radio Lancashire I have had 11 calls. Several elderly veterans from Clitheroe and surrounding villages. One gentleman was in the Home Guard based in Clitheroe. I have had three granddaughters ring up of ex servicemen and one chap who's Father was a Brigadier and was in charge of a Battalion as a rearguard at Dunkirk but was killed. I have had one call from Burnley and one from Accrington who served with men from Clitheroe.

This information has now been given to Marion and Roger to make appointments to go and see them.

The young people are not quite ready to do this actual process at the moment as they do need more training but are getting there.

I am also hoping to hear back from Andrew at North West Sound Archives based in the Clitheroe Museum in the next week and an appointment will be made to go and hear what he has unearthed. Then the young people will be invited to listen and give their thoughts on what they have heard.

Here we have Chris Tattersall with another Braille session on Thursday 4th March 2010 at the Art and Craft Studio with Morgan Rawcliffe filming in the background and Caroline Dewhurst and Morgan (K) watching on. This too is a very difficult process to learn.

Our thanks again go to Chris. 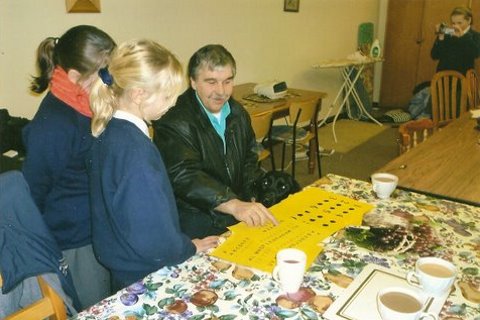 Activity day at Rock and River

This is Annie on the left and Daisy on the right as you look at the picture getting some filming practice in at our day at Rock and River near Chorley. A Girls day and they took part in Air Rifle shooting Archery, Zip Wires, Orienteering, High Wires and climbing. Quite a cold day so all credit to everyone of them for getting through everything. Roger was hand to film and record proceedings. We left at 08.15am and got back to Clitheroe for about 6pm. 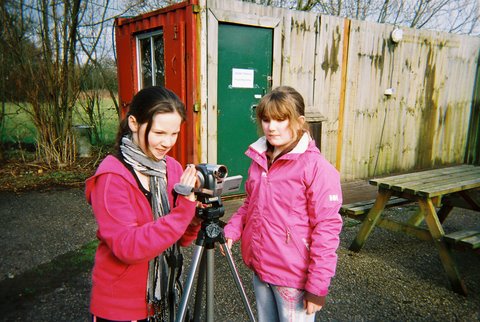 Video of Rock & River Day Out

This was one of our main meetings held on Tuesday 9th February 2010 at the Art and Craft Studio commencing at 4pm. We had quite an agenda to get through ranging from update on the website, Braille, calligraphy (with Norman) bringing some of his work for the young people to view and even try it. Marion and Roger were also filming and recording sound. This was the same afternoon that the local press came to cover the official publicity launch of our Heritage Lottery grant as well as our first real attempt at asking for those with memories of the Second World war or families of those here today who had loved ones living during that period in addition to any other young people who would like to come forward and join us.

Quite a lengthy meeting but so much to do. Still missed a few due to other commitment -football, cricket practice (Indoors) etc.

Thanks to everyone for attending and see how they do with their delegated tasks. 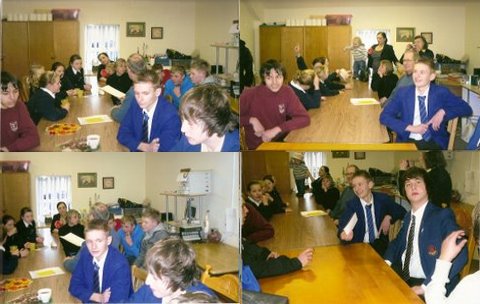 Young Ashleigh here being shown by Roger the basics of filming. This took place at the Art and Craft Studio on Friday 19th March 2010. Several other young people took part and they enjoyed the experience. We had planned to do some outdoor filming the week after but it poured down. This has yet to be rearranged. 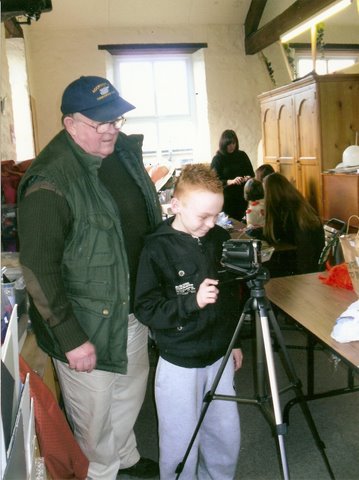